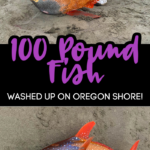 I will forever be fascinated with the ocean. I want to know what’s hiding down there!

A giant tropical fish washed up on the shores of Oregon this past week. This fish is known as an opah or moonfish, and was over 100 pounds!

This three and a half foot long fish is not native to the Oregon area whatsoever, so we aren’t really sure how it ended up there, but it is BEAUTIFUL. I just wouldn’t want to swim next to it.

According to the National Oceanic and Atmospheric Administration (NOAA), there isn’t much known about this species since they live deep in the ocean. However, the species is usually found in temperate and tropical waters.

Opahs can grow to over 6 feet and weigh over 600 pounds and they feed on krill and squid.

The fish was dead when found, but in great condition, which is also considered rare. The hope is to do some research and find out more about this species.

1 shares
People Are Dunking McDonald's Ice Cream Into Their Black Coffee and I Am Totally Trying It
← Previous
Starbucks Has A Black Cat Mug Just In Time For Halloween
Next →
Click here to cancel reply.