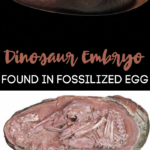 It looks like Jurassic Park may not be too far from reality.

Most recently a well-persevered dinosaur embryo was found inside a fossilized egg by researchers from Ganzhou, Jiangxi Province in southern China, and while you may be thinking that this isn’t the first fossilized dinosaur egg discovered, a well-preserved embryo is very rare, according to iScience.

Workers from the Yingliang Group which is a company that mines stones, suspected egg fossils and was put in storage for ten years.

The embryo resembles a bird-like oviraptorosaurs, part of the theropod group which is also known as “beast foot.”

As scary as the name sounds, (which is certainly does), this baby dinosaur was ready to hatch like a chicken as researchers noticed that the dinosaur was in a tucking posture before hatching, according to iScience journal.

While researchers will continue to study the rare specimen in more detail, the thought of humans coexisting with dinosaurs gives me the chills and it’s not just because it’s cold outside.