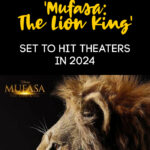 Hold on to your theater seats, because there is going to be a The Lion King prequel!!

We have actually known about this for a while — although I had forgotten.

But, now we are learning just the teensiest more about the release, and I’m giddy!!

In 1994, the OG The Lion King burst onto the scene in all its AMAZING cinematic glory, and it was a game changer for so many people.

Well now, we get to find out what happened BEFORE there was ever a Simba, Timon, or Pumbaa.

Although, spoiler alert, they are in the film.

The prequel, which we now know is officially titled Mufasa: The Lion King, will focus on Mufasa and Scar — who’s original name was Taka.

We will get to learn the back story of how Mufasa became the lion king — and perhaps learn a bit more about why Scar is the way he is.

According to WDW News Today, this new take on an old story will be live-action and not animated like we saw in the original.

I’m actually a little bummed by that. The animation on the OG The Lion King was so epic.

Be looking for Mufasa: The Lion King to hit theaters in 2024.

You KNOW we will drop a trailer for you just as soon as one is available. Stay tuned!!