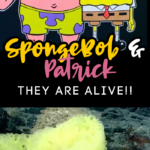 They are alive!! SpongeBob SquarePants and Patrick Starfish live, and they were caught on camera!

I mean, they aren’t wearing their fancy duds, but really, did you expect them to be wearing clothes in the wild?!? Ha!

Christopher Mah, a marine scientist with the Smithsonian Museum, caught a glimpse of the Nickelodeon cartoon characters deep in the Atlantic Ocean. They were actually a real-life yellow sponge and pink sea star.

Mah was trying to find a new species of starfish when he happened upon the underwater scene.

These SpongeBob doppelgangers were living on a deep-sea mountain called Retriever Seamount, about 200 miles off the coast of New York.

NOAA’s Okeanos Explorer has been going out to explore the depths of the ocean, which people don’t normally hang out in. (It’s FREEZING, as no sunlight is able to penetrate these depths!)

These look-alikes were spotted about a mile below the surface of the ocean, when the Okeanos Explorer was livestreaming its journey and capturing images of the local deep-sea life.

Now, this isn’t the first time that a sponge and starfish have been spotted together in the deep.

Cover the ears of your kids — The starfish usually feed off of the sponges. *Wide-Eyed Emoji*

But, this is the first time we have seen a SQUARE YELLOW sponge and a PINK starfish together in the deep, and it’s epic. LOL!!

Sponges can be all different colors and sizes, and it was just pure coincidence that this particular sponge was square and yellow (Or was it?!?).

The starfish was probably going after the sponge as its prey, but it was interrupted by the voyeurs behind the Okeanos Explorer. (The Photo below is a starfish dissolving and feeding on a sponge.)

Sea stars are carnivores. Once one clings to a clam, oyster, [sponge] or snail, the [sea star] extends its stomach out through its mouth then uses enzymes to break down and digest its prey.

I prefer to think that this particular sponge and starfish were just hanging out together — there were no predator and prey vibes going on at all.

All is copacetic in the world of Spongebob SquarePants and Patrick Starfish!