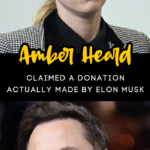 Is anyone buying what Amber Heard is putting down in her testimony?

She has been caught in so many slip ups, it’s getting hard to keep track of them all.

I’m not sure how SHE is keeping up with them all. LOL!

Her latest foray into the world of lying on the stand giving us information that isn’t exactly above board involves a donation “she made” to a children’s art program.

Amber claimed — under oath — that she donated $250,000 to the children’s art charity, The Art of Elysium in Los Angeles, California.

The Art of Elysium is an artist organization built on the idea that through service, art becomes a catalyst for social change. Our full circle approach rewards altruistic creativity by giving back to artists who share their gifts with those in need.

The Art of Elysium

Turns out, it wasn’t exactly Amber who made the donation to The Art of Elysium.

According to Insider, the CEO of the charity said that an anonymous donation was made in Amber’s name. But turns out, that money actually came from Elon Musk.

In a prerecorded deposition from March 3, 2022, Jennifer Howell, the CEO of the Art of Elysium, said that the organization only received one donation made in Heard’s name — a payment of $250,000 from an anonymous donor that they understood to be Musk.

You might remember that Elon and Amber were dating after she split from Johnny Depp.

The Art of Elysium isn’t the first time we have heard that Elon donated money in Amber’s name.

Previously, a representative of the American Civil Liberties Union said the organization received a $350,000 donation in Heard’s name from an account they believed to be associated with Musk

Just to be clear — actually donating your money to a charity is a WHOLE lot different than having money donated in your name.

I mean, deceased individuals have donations made to charities in their names all. the. time.

One of my friends, who passed from a brain tumor, asked that, in lieu of flowers, postmortem contributions be made in his name to the hospital that helped him during his treatments.

Previously, in this INSANE trail between Johnny Depp and Amber Heard, Amber claimed to have donated her entire $7 million divorce settlement to two charities. Those charities being the ACLU and Children’s Hospital Los Angeles.

As it happens, she only PLEDGED the money to those charities — which means she PLANS to give them money.

Amber would like us to believe that pledging the money is exactly the same thing as actually paying them the money. *Eye Roll Emoji*

The Children’s Hospital Los Angeles claims that they only ever received $250,000 directly from Heard. They also received an additional $100,000 payment, but this came from Johnny Depp as part of the divorce agreement.

Amber just needs to stop with all this crap talk about donating money to charity. Obviously, it isn’t happening. She just keeps digging her hole bigger and bigger.