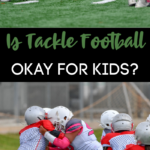 Sunday night football is not for kids, and apparently every other day of the week too.

Many moms and dads believe tackle football is not to be played by kids, considering the latest data released from the National Sports and Society Survey showing 50% of individuals disagreed with the statement that tackle football is okay for young children to play.

Statement: “Tackle football is appropriate for kids to play.”

Of the 4,000 total of U.S. adults who completed the survey, less than 50% said they agreed with the statement above and the other five percent, well they were uncertain.

While the survey didn’t ask for a reason to explain their answer, it might be because of the head injuries that are associated with the fan fanatic sport.

Specifically injuries that have gone public from famous players who suffered from CTE, Chronic Traumatic Encephalopathy, have parents raising eyebrows and expressing concerns about their child participating on the field.

Although it is currently uncertain how many tackles or hits it takes to cause CTE, or if another individual is more susceptible than the next, according to the CDC, it’s “caused in part by repeated traumatic brain injuries, including concussions, and repeated hits to the head, called subconcussive head impacts.”

Meanwhile, a CTE diagnosis can only be revealed after a person has passed.

Even though other sports can cause similar injuries and a much greater risk when it comes to concussions, tackle football is the number one offender.

While there is clearly a divide in opinions regarding whether or not kids should be playing tackle football, the question is, “Will you allow your kid to play?”