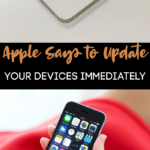 Whatever you may be doing right now, drop everything except for your Apple devices because the tech company says you need to update immediately.

Most recently, Apple has discovered a serious security vulnerability for iPhones, iPads, and Macs that have the potential to allow hackers to have complete power over your phone.

Apple clarifies that the security vulnerability could mean that hackers could gain “full administrative access” to your cellphone, allowing intruders to impersonate the owner and run any software in their name according to Rachel Tobac, CEO of SocialProof Security.

While Apple released two security reports regarding the issue on Wednesday, the reports didn’t receive much attention outside of tech publications.

Security experts have recommended to update the following devices as soon as possible:

Currently, Apple has not yet mentioned how, where, or by whom the security threats were found.

So before you go to sleep tonight, remember to update your devices, if not sooner to make sure your Apple devices remain safe.

As a reminder you can update by visiting Settings in your devices then “Software Update”.

The update is iOS 15.6.1 and says in the description it is “recommended for all users”.