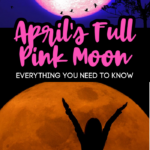 A full moon is one of my favorite things!

The first full moon of Spring 2022 will happen just before Easter Sunday, it’s called the Paschal Moon and it will be beautiful!

Not to burst your bubble or anything, but it isn’t actually a pink moon.

The reason they call it the pink moon has to do with how the timing corresponds with the ‘phlox subulata’ wildflower blooming which is also called ‘moss pink’.

However, the moon won’t be visible until after sundown because of the horizon.

This is the day before Easter, and what a wonderful way to start celebrating the Easter holiday!

If you want to take photos of the Super Pink Moon, grab your biggest lens available and a tripod.

Use your timer or a remote so that you don’t cause the camera to shake and you can get the clearest shots!