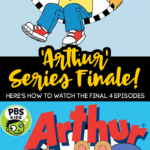 Did you know that ‘Arthur’ is the longest-running kid’s television show In TV history?

Last year we told you that ‘Arthur’ would be ending and we just found out some details on that which we had to share!

You know, I was happy to say goodbye to ‘Caillou’, I know some of you liked that whiny brat… but it was a no-go in my house.

‘Arthur’ Is Ending After 25 Years

But ‘Arthur’ and the other animal friends, well that one makes me a little sad.

While there won’t be new episodes for him to enjoy over the coming years, we will always have 25 years’ worth of old episodes to get through.

‘Arthur’ was the longest-running children’s show and was shown on PBS for 25 years.

For more than 25 years, Arthur and his friends have kept viewers learning and growing through their true-to-life experiences. We can’t wait to debut these episodes and introduce new ARTHUR content that will give fans more ways to engage with their favorite aardvark.

I also learned today that the characters will be featured in a series of digital shorts, digital content that is interactive, as well as podcasts.

The entire series will still be available to stream on PBS kids as of now.

How Can You Watch The ‘Arthur’ Finale?

The finale will be a 4 part episode that will show us what happens with the characters in the future, as adults.

Before the 4 part finale, there will be a marathon running of the series as well as specials starting on February 16th, 2022 on PBS as well as streaming on PBS Kids.