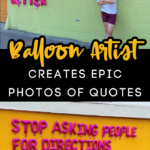 This artist has turned his love for art, creating, occasional humor, and — well, balloons — into the coolest visual displays, and he just may have a quote that you need.

Michael James Schneider was working a mundane retail job — so many of us have been there!! — but he longed to do something different.

He wanted to unleash the artist that was hidden inside, and simply create. Create stuff. Just be creative.

I did everything creative I could get my hands on: designed sets, started a novel, and started my blog about, ostensibly, the journey from having a steady (if mundane) job to kickstarting one’s creative life.

When he first started dipping his toes into the creative world, he never dreamed he’d end up where he is now.

He originally wanted to make — and display — art that made fun of social media.

This is hardly an original idea. People have been making fun of social media since it existed, so I used my dull lifeless brand of humor to execute this too.

He fumbled around with that for a bit, when he eventually stumbled upon the idea to spell things out with balloons.

I remember getting a few [balloons] for the first time about three years ago. No, it wasn’t a witty tweet or thoughtful mental health quote. No no, they spelled out “I just pooped at work” and the caption was “Doo what scares you the most.”

But, from that very small beginning, a whole theme emerged; He would make sayings with balloons, and document them in photograph!

And, these photographs have gotten quite the following of fans!!

All it takes is one look at his Facebook page to see the genius that is Michael James Schneider.

While he doesn’t post exclusively balloon quote photos on his social media, those bad boys are hella popular, often getting upwards of 7.5K shares each.

Some of his most popular posts can get shares of 22K or 38K — which is AMAZING!!

My FAVORITE balloon quote photo that he has posted has more than 223K shares, and I can see why!! His quotes are timely and spot on — and the photos are quirky and genius!

I’ve always been a fan of typographic artists: at museums, I make a beeline to check out Jenny Holzer or Barbara Kruger’s work. I never thought my work would be seen by so many eyes, and in person I might be self deprecating or bashful about the work I make, but the truth is that I’m having the time of my life.

You can check out his work on the Blcksmth Facebook page, or you can checkout his Blcksmth webpage.