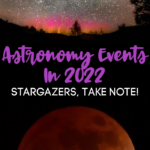 If you are a stargazer like me, then you’ll want to note all of these events on your calendar so you can plan appropriately and not miss out!

A new year means new events happening in the sky and I am so excited!

I missed so many this year because of cloudy skies, so I am hoping for more chances this coming year to partake in the beauty of the stars.

One of the coolest events is the alignment of 5 planets, and I will list out all of the info below for you.

One of my goals for this year is to pick up a telescope to have on hand, I have always wanted one yet for some reason never made the purchase.

The first major event is at the end of March, which will literally be here before we know it.

Trio of Planets Bunch Together

A trio of planets will bunch together and will be visible in the early morning hours towards the end of the month of March.

The three planets are Mars, Saturn, and Venus, they will appear so close together in the sky that you should be able to see them all at one time through your telescope.

There is nothing better than a beautiful meteor shower and the Lyrid meteor shower will be visible to us during its peak on April 21st, and April 22nd.

You’ll be able to view about 15 shooting stars per hour, which isn’t a ton… but still so worth it!

If 15 per hour isn’t enough to make you stay up to watch, don’t worry… about 2 weeks later you can view the Aquarids which will host about 20-40 meteors per hour on May 4th and May 5th.

On the night of May 15th, the moon will turn red while it passes through Earth’s shadow!

As long as the weather cooperates, the entire U.S. will be able to see this total lunar eclipse!

The second total lunar eclipse will take place just before sunrise on November 8th, but if you’re on the East Coast you’ll miss out on this one.

Supermoons are a wonderful chance to catch a spectacular shot of the moon if you are into photography.

This is one of the events of 2022 that I am most excited about!

On June 24th, Mercury, Venus, Mars, Jupiter, and Saturn will align in order just before sunrise!

You will be able to view this with the naked eye and the crescent moon will also be visible between Venus and Mars.

The Perseid meteor shower is one of the best!

From August 12th, into the 13th we will have the chance to view between 50-100 shooting stars per hour, just have to hope that the weather is good and the skies are clear.

While this meteor shower isn’t as active as the Perseid meteor shower, you may have a better chance at viewing them.

There will be about 20 meteors per hour and you can catch them the night of October 20th into the 21st.

This is when Mars is opposite of the sun from our perspective from here on Earth.

Because of this, Mars will be visible all night long and also appear brighter in the sky on December 8th and will not happen again until January 15th, 2025.

This is another one for us diehard stargazers!

The Geminids peak in December and from December 13th into the 14th we will have the chance to view over 100 meteors per hour!

It’s going to be a great year!