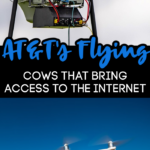 Considering the 21st century is home to drones making deliveries and futuristic cars, it makes sense that the invention of flying cows has now become a reality.

Thanks to an experimental new drone, the AT&T 5G Flying COW has been created and yes, it’s really called the “Flying COW” and no, the farm animals still can’t fly.

The word “COW”, an acronym that stands for Flying Cell on Wings according to the phone company, the new drone is literally a floating cell tower that hovers over areas in need of a wifi connection.

Broadcasting a superior 5G signal within around a 10 mile range that can operate from thousands of miles away, the drones can potentially bring high-speed cell service for areas in need of access.

Although AT&T has previously used LTE Flying COWs to provide internet access to areas who have witnessed natural disasters, the short range of 5G signals aren’t quite yet suited for disaster relief.

While AT&T is currently working on the untethered version of the drone, AT&T also mentions “building a litter of RoboDogs” to perform rescue missions or disable bombs according to a press release.

A century built around “Flying Cows” and RoboDogs; you can watch the video below to watch the “Flying COWs in action!