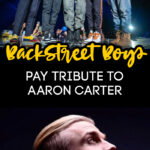 We were all shocked by the sad news that Aaron Carter passed away Saturday at the young age of 34.

His estranged brother — BackStreet Boy Nick Carter — was quick to take to Instagram to speak out about the death of his younger brother.

My heart is broken. Even though my brother and I have had a complicated relationship, my love for him has never ever faded.

I have always held on to the hope that he would somehow, someday want to walk a healthy path and eventually find the help that he so desperately needed.

Sometimes we want to blame someone or something for a loss, but the truth is that addiction and mental illness is the real villain here.

I will miss my brother more than anyone will ever know. I love you Chizz. Now you can finally have the peace you could never find here on earth….I love you baby brother.

Nick took the stage with his fellow BackStreet Boys for a London Show on Sunday, and the group paid tribute to the late Aaron Carter.

According to a fan who was at the concert, it was the “most emotional moment of the Backstreet Boys concert so far. They made a speech about Aaron Carter. Not a dry eye in the o2.”

Tonight we got a little bit of heavy hearts because we lost one of our family members yesterday.

We just wanted to find a moment in our show to recognize that Nick’s little brother, Aaron Carter, passed away yesterday at 34 years old. He was a part of our family and we thank you guys for all the love and all the well wishes and all the support.

Our thoughts go out to the Carter family at this incredibly difficult time.

Aaron is survived by his 10-month-old son, prince, his mother, and his siblings, Nick, Angel and B.J.