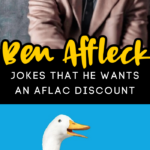 While Ben Affleck has had a pretty stellar acting career, he’s also been through the ringer — divorce, bad movies (I mean, did you see Gigli?), public substance abuse, the tabloid fodder that is his relationship with J.Lo …

But, perhaps there is nothing more annoying and cringe-worthy than having the same phonetic name as the insurance company that is Aflac.

“This is my cross to bear,” Affleck joked to Lily Rabe, one of his The Tender Bar costars, during a January 12th segment of Wired’s “Autocomplete Interview.”

Apparently, this similarity in names between “Affleck” and “Aflac” is brought up all the time. I can imagine that it would be hella annoying to deal with on the daily.

During the segment of Wired’s “Autocomplete Interview,” Ben Affleck and Lily Rabe jest back and forth about the unfortunate reality of having basically the same last as an insurance giant.

Have you ever seen “Autocomplete Interview?” It is an internet video series that asks celebrities some of the most Googled questions about themselves, and these celebrities then give (hopefully) the actual factual answers.

Does Ben Affleck own Aflac Insurance?

This is one of the many most asked questions that people Google about Ben Affleck. Random? Not as much as you’d think.

Imagine this — An insurance company, imagine you have a very unusual, kind of, slightly unappealing sounding name. Now imagine that somehow, there’s a huge insurance company that also has that name.

And then imagine what it’s like when you’re on an airplane, and the hammered lady behind you recognizes you, and thinks she’s gonna do her best Gilbert Gottfried for six hours, all the way to New York.

I don’t even WANT to imagine that. LOL!! Gilbert Gottfried is not only known for being a rude and crude comedian, his voice is almost more famous than he is. I’m sure he is a fine, upstanding individual, but his voice sends cold shivers up my spine — like nails on a chalkboard. I mean, have you heard him?!? Here — listen to this. (Don’t watch it with kids in the room. He is pretty crude.)

Thank you, Aflac! I don’t own it! But I deserve it. I would like a discount.

Come on, Aflac. He’s got a point. He’s like a walking billboard for the company.

Hook a guy up with the free insurance — like he needs it. LOL!!

Has Ben Affleck Recently Been In Any Movies?

It’s been a hot minute since we’ve really seen Ben in anything. He has mostly been working in the role of executive producer for a bunch of films.

But, good news for all those Affleck fans out there. He is currently in a new film that was released in December. It actually looks really, really good.

It is based on the best selling memoir, The Tender Bar, which was named a “Best Book of the Year” by The New York Times.

​​From director George Clooney and based on the best-selling memoir, The Tender Bar follows an aspiring writer (Tye Sheridan) pursuing his romantic and professional dreams. From a stool in his uncle’s (Ben Affleck) bar, he learns what it means to grow up from a colorful group of local characters.

You can stream The Tender Bar right from Amazon Prime for free if you have a Prime membership.