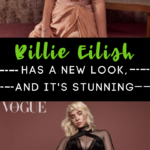 Billie Eilish is known for her fashion aesthetic — which usually consists of overly baggy clothes, multi-colored hair, and hardly any skin showing.

I mean, I get it. She’s a younger artist, and she doesn’t want to be sexulized for what she looks like, but wants her music to take center stage.

But, Ms. Billie Eilish seems to have broken out of her mold just a bit, and it’s stunning!

Billie recently sat for a Vogue Magazine photo shoot where she ditched her typical baggy clothes and two-toned hair.

She, instead, is donning a corset, platinum blonde hair, sheer lingerie, and has plenty of skin showing — including tons ‘o cleavage. GASP!!

Apparently the shoot was Billie’s idea, and it’s a nod to old-time Hollywood.

thank you — british vogue team for respecting my vision and making this come to life.

Billie spent MONTHS prior to the shoot wearing a wig — she wasn’t ready to show the world her new look for her second album.

There are reports that she even bought a Billie Eilish Halloween costume, so she could pull off the reveal when she was ready.

When she officially unveils her hair on Instagram — the photo becomes the fastest post to reach a million likes: six minutes. Within two days, it’s the third most-liked post ever.

I think it’s a good time for her to come into her own — as they say.

She was just 13 years old when we first were introduced to Billie through her song “Ocean Eyes.”

She has grown up in front of the public eye, and she has successfully done it in her own way.

I think you look FABULOUS, Billie!!

Congrats on the new album, the new look, the photo shoot, and I’m so happy you just remain you!

2 shares
People Are Going Crazy Over These Solar Powered Flowers You Can Put In Your Yard
← Previous
You Can Get A Springtime Tea At Starbucks To Give You All The Spring Vibes
Next →
Click here to cancel reply.