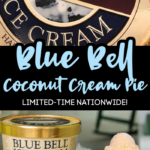 Coconut is one of my favorite flavors, in fact, I had the best piece of coconut cream pie the other day from a local restaurant… it was so good that I almost cried.

That sounds a bit exaggerated, but I’m not even kidding, it was one of the best things I had ever eaten in my entire life.

Now I just found out that Blue Bell’s newest ice cream flavor is coconut cream pie has been released nationwide and I have got to get some today!

This is a newer flavor for Blue Bell and they announced that they will offer a new coconut cream pie flavor nationwide!

Blue Bell is a pretty big deal here in Texas and you can find it pretty much everywhere down here, I’m not sure how hard it is to get in other states though.

Of course, just like nearly everything I love… the Blue Bell Coconut Cream Pie flavor is only available for a limited time so if you try it and like it, stock up if you can!

I’m going out and grabbing myself some today!