This Borzoi Sighthound May Have The ‘World’s Longest Nose’ And She Is Adorable! 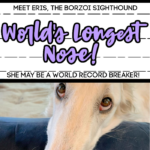 I’m kind of shocked that I haven’t heard of Eris before now! For one, she has the same rare name as our barn cat, and secondly… she’s an internet sensation because of her adorable appearance!

I love uniqueness among people and animals, especially as a photographer. Eris definitely has a great look for photographs, she is so stunning!

Eris is a Borzoi Sighthound! This breed is built like a Greyhound under all of that long beautiful silky hair, and can run 35 to 40 miles per hour and they LOVE to run!

They used to be called the Russian Wolfhound! Yea, that sounds like a tough intimidating name, however, these dogs are super lovable!

Eris was adopted in Richmond, Virginia in 2018. Her owners believe that she may be a world record breaker for ‘World’s Longest Nose’.

We get stopped a lot because people want to ask questions or know what kind of dog she is. She’s also got a really big personality, so a lot of our neighbors know who she is, and she just loves saying hello to them!

So when I say nose, I actually mean muzzle. Eris is said to possibly have the world’s longest muzzle.

Eris’s muzzle has been measured at 12.2 inches! Dude, that’s over one foot long! Her muzzle has brought so much attention that her Instagram has over 233K followers!

3 shares
People Are Putting Bars of Soap In Their Garden And It Is So Smart
← Previous
Meet Augie, The Oldest Golden Retriever In The World
Next →
Click here to cancel reply.