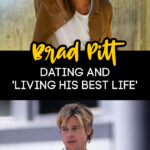 Whenever there’s any news on the Brad Pitt dating front, every woman jumps to attention and perks up their ears.

If we are being real, we’re all hoping there is a sliver of a chance that he’ll meet us and fall head over heels.

Come one. Admit it. You’ve thought about it once or twice!

It’s a wonder that Brad even has a moment to breathe, let alone date, with his crazy busy schedule.

He’s currently promoting his new film, Bullet Train. And, when he’s not doing the media circuit for the movie, he’s focusing on his six kids — 3 of which he adopted with Angelina Jolie, and 3 of which are biologically his.

Not only does he have movies on the docket and kids to pay attention to, he also is co-owner of Provence winery Château Miraval.

There’s ALSO the production company that he is a part of, Plan B production.

Even with his busy-as-heck schedule, Brad finds time for his other passions in life. He is into all things artsy. From architecture to anything with a design/aesthetic point of view, he loves it all.

He’s living his best life under the circumstances.

As for his love life — Brad is dating, but he isn’t locked down in a relationship.

He has a large group of artsy friends in L.A. that he hangs out with. — He’s dating, but is not in a serious relationship.

We are so happy to hear that Brad is “living his best life.” He deserves a bit of a break after the tough few years that he’s had.