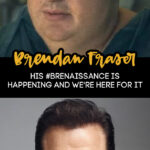 Brendon Fraser was one of the HOTTEST actors in the 90s, and I’ve always thought — nay, KNOWN — that he had the talent to back it up.

It seemed like Brendon was at the top of his game, with hit after hit.

From Encino Man, to School Ties, to Airheads, to Blast From The Past, to The Mummy Franchise (to name a few), he seemed unstoppable.

Then he just kind of disappeared.

There’s an entire back story there. It started when he accused Hollywood Foreign Press Association, Philip Berk, of sexual assault.

If you want to work in Hollywood, accusing one of the TOP people in the industry of sexual assault is NOT something you want to do.

That seemed like the beginning of the end for Brendan.

Although his IMDB page shows that he has been actively working in films, you wouldn’t know it.

This year, he took on a “little” role in the upcoming film The Whale, and now the #Brenaissance of Brendan Fraser is happening.

If there’s no risk, then why bother? I want to learn from the people I’m working with at this point in my career. I’ve had such variety, a lot of high highs and low lows, so what I’m keen for, in the second half of my time doing this, is to feel like I’m contributing to the craft, and I’m learning from it. This is a prime opportunity. I wanted to disappear into it. My hope was that I would become unrecognizable.

Brendan Fraser on his role in The Whale

And, we — along with the ENTIRE internet — seriously couldn’t be happier!!

Just last week, The Whale was screened at the 79th Venice International Film Festival, and Brendan got a six-minute standing ovation for his performance.

Seriously, I dare you to watch the clip of him trying to hold it together for the recognition and accolades without tearing up.

This dude has overcome the sexual assault allegation, a Hollywood blackballing, a hard divorce, money problems, chronic pain, and having to deal with people constantly commenting about his physical change in appearance through the years.

Even celebrities are getting behind the #Brenaissance of Brendan Fraser.

Dwayne Johnson — who starred in The Mummy alongside Brendan — even Tweeted his feelings about Brendan’s return.

Man this makes me so happy to see this beautiful ovation for Brendan. He supported me coming into his Mummy Returns franchise for my first ever role, which kicked off my Hollywood career. Rooting for all your success brother —

As for the fans, we always knew Brendan was awesome, and it’s about time everyone paid attention to this humble, sweet soul.

And, let me get on my soapbox for just a moment.

For all those haters talking about his change in physical appearance over the years, I’d like to see pictures of YOU from 25 years ago. I’m sure you’ve changed just a little, too.

As for Brendan, you can catch him this December in the role that has kicked off his #Brenaissance.

The Whale opens in theaters this December.

It centers around a 600-pound, gay, reclusive English teacher who is trying to reconcile with his estranged teenage daughter (Sadie Sink from Stranger Things) while coming to terms with his severe obesity.

You can BET I’ll be in the middle of that theater with my bucket of popcorn and giant coke, watching one of my FAVORITE actors making his comeback.