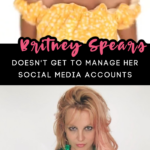 There seems to be a LOT of dancing, a few generic pictures of the singer, and not much else.

The world went crazy over the yellow top theory — do you remember what I’m talking about?

The #FreeBritney movement was in full force, and one commenter made the post, “if you need help, wear yellow in your next video.”

I’ll be darned if she didn’t wear a bright yellow shirt in the very next video that she posted.

She captioned the video, “HOLY HOLY CRAP ? !!!!!! My florist surprised me today by making the flower arrangement all different colors ????  ….. I was so excited I threw on my favorite yellow shirt and just had to SHARE ???⭐️⭐️⭐️ !!!!”

But, the point is — she wore the yellow shirt.

Turns out, Britney doesn’t even get much say about the things she posts on social media.

In a bombshell report in the New Yorker, it’s now been revealed that Spears does not have full control over her social media posts.

She gets to write and attach pictures and videos to her posts — but then she has to submit them to CrowdSurf, which is the company her firm hired to manage her social media posts.

Apparently there is a team of people that meet weekly to discuss all things related to the upkeep of Britney, and one of those things just happens to be the stuff she is posting online.

Sometimes things she has tried to post are ‘deemed too sensitive’ for Britney to share with the world, and those posts get the axe.

Word has it, she isn’t supposed to post anything about the conservatorship — which is why we haven’t heard her side of the story until now.

That’s not going to stop me from reading every bit of what comes from Britney’s account. We get little clues all the time — like the yellow shirt theory — that the singer is less than okay.