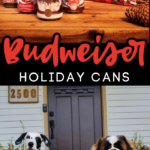 Budweiser says it’s officially the holiday season considering their newest pack of cans are decorated for the most wonderful time of year, and that’s the fa la la la days.

Wrapped like a present in red and black flannel like patterns and secured with a big red bow and ribbon, Budweiser’s newest holiday beer decorate the kitchen counters and dining room table during holiday get togethers with friends and family.

Welcoming the first ever ‘Pupwesier’ contest winner who’s face will appear on the popular beer cans for the holiday season is a fluffy Saint Bernard named Wilson!

Congratulating the furbaby and alongside Wilson is the familiar Budweiser Dalmatian pictured on of the cans sniffing through the white snow and stumbling upon a red beer bottle.

Also featuring the World-Famous Budweiser Clydesdales on the front of the beer cans, the four limited edition cans are for sipping by the crackling fire with a sheet of snow on the ground, and are available nationwide with up to two of the same variety in each decorated pack!