In Case You’re Wanting Somewhere Spooky To Stay, The Cecil Hotel Is Planning To Reopen For Business This Year 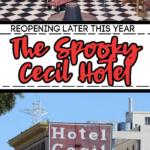 If you haven’t already watched ‘Crime Scene: The Vanishing At The Cecil Hotel’, you need to! The Cecil Hotel is the home of many deaths and crimes over the years.

Even Richard Ramirez “The Nightstalker” serial killer stayed there during his killing spree. Even the Black Dahlia!

One of the most notable stories is the disappearance and death of 21-year-old Eliza Lam.

When Eliza went missing, her body was eventually found in a water tank on the hotel’s roof. Yes, the tank that the hotel’s drinking water came from, I can not even imagine!

The Cecil Hotel has been a hot spot for ghost hunters, both the pros like the ‘Ghost Adventures’ crew as well as hobbyist ghost hunters. the history is very dark.

The Cecil hotel has been closed for quite a while and apparently they are planning on reopening for business later this year.

If you watched the the Netflix documentary, they mentioned that the Cecil Hotel rebranded in 2011 as Stay on Main. In 2014 the hotel was sold and then a few years later they closed for renovations.

The plan was for the work to be completed last year so that they could reopen, but then came the Covid-19 pandemic and everything was put on hold.

Who Wants To Go On A Ghost Adventure?

However, things seem to be back on track and the hotel is planning on opening again by October 2021.

When the hotel reopens it will have 299 hotel rooms and 264 residential units. It’s also said that the roof will feature a pool for guests.

At this time it is not known if it will be called the Cecil Hotel again, however, that could be a huge selling point honestly. People are into the dark and creepy stories of the past.

I guess we will just have to wait and see. I’m curious, would you stay at the Cecil Hotel?

314shares
So, People Are Making Mashed Potatoes Out of Lay's Chips and I'm Not Even Mad
← Previous
If You Are Experiencing Power Outages, Here Are The Foods You Can Keep And What You Should Toss
Next →
Click here to cancel reply.