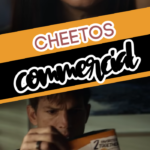 The Super Bowl is February 7th, and we all know the best part of the Super Bowl: The Commercials!!

We are in luck, because companies have started to tease their commercials, and I absolutely love it.

Perhaps the one I am looking forward to the MOST is the Cheetos commercial that stars Mila Kunis, Ashton Kutcher, and rapper Shaggy.

Cheetos has dropped little teaser trailers, and I am completely obsessed with finding out what is going to happen!!

So far, two teasers have dropped for this Cheetos commercial, and not only is it super ominous, you are immediately hooked on the storyline.

The first teaser starts off with Kutcher coming in through the front door into a dark room. He tells someone off-screen that he’ll be “right downstairs.”

After he shuts and locks the door, he sits down at a desk, opens a large envelope, and pulls out a bunch of black and white photos.

The photos are purposely hard to make out, but they seem to be of a woman — could it be Mila?!? — and other figures in a parking garage.

As he flips through the photos, Ashton keeps repeating “Oh my god!”

At last, he pulls an empty bag of Cheetos Crunch Pop Mix out of the envelope. He pauses, in what looks like shock, and then declares, “I knew it.”

Mila, teary eyed is apologizing profusely, and we assume she is talking to Ashton.

BUT, as the camera pulls back, Mila breaks character, and we see that she is practicing a speech in the mirror, possibly planning what she is going to say to Kutcher.

As if the whole thing wasn’t pretty weird, when the camera pulls off of Mila, Shaggy is sitting on the bed, coaching her through the speech that she is giving in the mirror.

Then she turns back toward the mirror and begins to practice once again. At this point, Shaggy’s hit song “It Wasn’t Me” starts to play.

87 shares
You Can Get A Gizmo Frappuccino From Starbucks That Will Send You Whirling
← Previous
You Can Get Paid To Taste Test Candy And Chocolate and I'm Signing Up!
Next →
Click here to cancel reply.