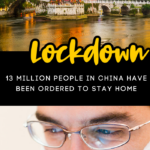 Here we go again. Only THIS time, the Winter Olympic Games are at stake.

China has ordered the lockdown of as many as 13 million people in the northern city of Xi’an — of course, due to the coronavirus.

This news comes as China is just weeks away from hosting the 2022 Winter Olympic Games.

A spike in the number of coronavirus cases has hit northern China, and this has caused the government to lock down neighborhoods and workplaces — once again.

State media reported that city officials ordered all residents to stay home unless they had a pressing reason to go out and suspended all transport to and from the city apart from special cases.

As of Wednesday night, people in Xi’an are under the new order. Only 1 person from each household will be allowed to leave the house every 2 days to buy household necessities.

Better stock up on that toilet paper, AMIRITE?!?

This order is “until further notice,” and there is no word on when that might be.

If you believe social media reports, people are panic buying — much like we saw at the beginning of the pandemic. BUT, actual residents say that things have been pretty peaceful, with people being allowed to come and go as needed.

China has adopted strict pandemic control measures under its policy of seeking to drive new transmissions to zero, leading to frequent lockdowns, universal masking and mass testing. While the policy has not been entirely successful while leading to massive disruptions in travel and trade, Beijing credits it with largely containing the spread of the virus.

These protective pandemic control measures have been stepped up in recent days, due to the fact that the world is about to fall upon the country for the Winter Olympic Games.

Now, the lockdown of Xi’an is definitely some of the harshest restrictions that China has seen, but they are trying to isolate and control.

Xi’an on Thursday reported another 63 locally transmitted cases over the previous 24 hours, pushing the city’s total to at least 211 over the past week.

I can’t say that I blame them. Knock it out before it spreads and knocks more of the world out, right?!?