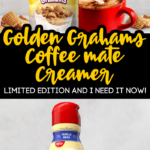 There is a local coffee shop near me that sells a coffee drink they call a ‘Honey Bear’ and I’ve wanted to recreate it at home.

Well, Nestle’s Coffee mate is adding a new flavor and I think it may be perfect for recreating my newest favorite coffee drink at home.

You’ll be able to find it with the refrigerated coffee creamers and it’s called Coffee mate Golden Grahams Creamer and I’m dying to try it.

It’s a new adult take on the classic Golden Grahams cereal from General Mills that we all grew up with!

With flavors of graham cracker, brown sugar, and honey, how could you go wrong?

If I get this and add a bit of cinnamon I can totally recreate my favorite coffee drink at home.

The Coffee mate Golden Grahams Creamer will come in a 32 ounce sized bottle for about $3.99 and … it’s limited edition.

I read that the Vanilla Bean creamer will combine the flavor of vanilla bean with caramel and that sounds delicious!

The Zero Sugar Cinnamon Roll will have half the calories of the classic Coffee mate and has the flavors of cinnamon, sweet bread, and vanilla frosting all in one tasty creamer.

Sadly, we still have to wait a while for the limited-edition Coffee mate Golden Grahams Creamer because it won’t release until January of 2022!