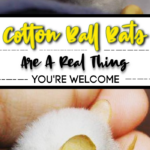 Now, I’m not usually a fan of bats.

When I was growing up in the mountains of southern California, for some reason, I kept getting bats in my room — and I wasn’t all too happy about it.

And, then I grew up, and learned there were things in Australia called Flying Foxes.

BUT, then I saw these teeny tiny bats that live in Honduras, Nicaragua, west Panama, and Costa Rica — I mean, they are hardly bats at all!

Even I have to admit, these little puff balls are super cute!!

They are commonly called Cotton Ball Bats, but their official name is the Caribbean White Tent-​Making Bat or the White Honduran Bat.

Now, you probably can’t just plop down in the middle of a rainforest, and happen upon one of these bats.

First of all, being that they are bats, they come out mainly at night.

They are also pretty tiny — about 10cm, to be exact.

You might have some luck glimpsing this fuzzy-wuzzy dudes if you hang out by rivers, where the bats like to feast on the tiny cranberry like figs of the Ficus colubrinae plant.

They make little tent houses out of heliconia leaves — that’s a ficus plant with huge leaves in the rainforest.

Their habitat is highly specific — they eat ONE kind of fig, and live in ONE kind of plant — so these little guys are on the very vulnerable list of animals.

One thing is for CERTAIN — these little cotton balls are the CUTEST bats that I have ever seen!!