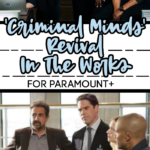 Ok, so I am more than excited… this is the best news I have read in awhile. ‘Criminal Minds’ is one of my all-time favorite television shows and I am so ready for a revival.

I can not even count how many times I have watched each episode of ‘Criminal Minds’. Every episode is exciting and different and I am ready for more.

‘Criminal Minds’ had an amazing 15 season run on television and many dedicated fans! I know most of you loved Derek Morgan, but Spencer Reid was my favorite!

All of the characters were awesome though, they all had chemistry and their own personal quirks.

It hasn’t been all that long since the show ended, but I am super ready for this revival! In fact, it’s only been like a year since it ended!

The revival of the series will be coming to Paramount+, which is a streaming service that was known as CBS All Access.

The details about which cast members will be returning for the revival series have not been released yet. I sure do hope my favorites are involved in this!

Are you excited about this revival? Who are your favorite ‘Criminal Minds’ characters? I hope it leads to the return of the series!

Yea although creepy it was all time favorite show can’t wait for it to come back.