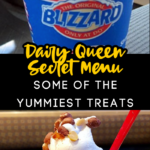 We all know about — and LOVE — the Starbucks Secret Menu. I’m sure you have tried at least one of the drinks, and hopefully you LOVED it.

But, did you know there are other delicious places that have secret menus?

One of my absolute favorite places to go and try secret and new yummies is Dairy Queen.

Oh yeah, they have a secret menu, and here are some of the BEST frozen goodies that you can try out next time you are there.

Peanut Buster Parfait — This is just a chocolate fudge sundae, but the magic comes in the form of peanuts. Ask them to add whole peanuts to the top for a crunchy, delicious treat.

Frozen Hot Chocolate — This isn’t as much “secret” as it is a “retired” drink. If you haven’t tried it, prepare to be addicted! Most locations still know the recipe and have the items to make this drink. Just ask!

Banana Cream Pie Blizzard — Some Dairy Queen employees will actually know this one by name, but don’t count on that. This is just a vanilla Blizzard with pie pieces, sliced bananas, and whip cream mixed in.

Mocha Heath Bar Blizzard — This combines three of my favorite things: mocha, Heath Bar, and Blizzard ice cream. Just have them blend together a vanilla Blizzard, coffee syrup, chocolate syrup, and Heath Bar. Once you try it, you’ll never have a plain Heath Bar Blizzard again.

Banana Split Blizzard — This is exactly what it sounds like. It’s a swirled up banana split in Blizzard form, and it’s delicious! Just ask for a vanilla Blizzard with Banana Split “Fixins.” You’ll get a tasty combination of bananas, strawberries, and pineapple.

Coffee Blizzard — I’m about to grab my keys and run out the door for this one! Just ask for a vanilla Blizzard with coffee syrup mixed in. Want to take it to the next level? Have them add Choco Chunks.

Butterbeer Blizzard — This one comes courtesy of @thedairyqueenking on TikTok. Ask for a vanilla Blizzard, but get them to blend in butterscotch, vanilla, and butterfinger. Make sure they top it with whipped cream.

What do you think? Which one sounds the best? You have to let us know when you try one.