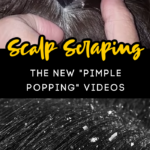 There is a whole underground world on YouTube that I just stumbled into, and it’s equal parts disturbing and satisfying as hell.

Okay, so it’s not so much an underground world as it is wide open and out there for anyone to peruse.

It is akin to watching those disgusting, glorious videos of pimple popping — you know, those ones where you get lost for hours before you resurface and wonder what the hell you’ve been watching for two hours?!?

These videos are of people scraping dandruff off other people’s heads. Sounds gross, right. I thought so too — until I found myself getting sucked into the world of dry, flaky scalps.

I’m not afraid to admit, I’ve dealt with my fair share of flaky scalps. I went through a period where my scalp just wouldn’t cooperate, and my daughter is a sufferer of the itchy scalp.

But, I’ve never taken such delight in that white dandruff snow quite as much as I did watching these videos.

In these videos, you will mostly see small sections of hair that people have parted with a comb.

They then take a fine-tooth comb — in some instances, it looks kinda like they use a metal flea comb of sorts — and scrape in little tiny sections while the flake starts to release from the scalp in satisfying clumps.

When I say it’s satisfying —

Some of the videos are even captioned with the timestamp of when an exceptionally satisfying flake works its way free of it’s scalpy confines. So, if you are one of those immediate gratification kind of people, you can fast forward to the good parts. LOL!!

Now, in some cases, the videos are of psoriasis on the scalp, and that is a whole other monster that I don’t know at all how to deal with.

But, a lot of the videos are just people ridding themselves of the itchy monster that is dandruff of the scalp.

The videos got me quite curious as to if ridding the scalp of dandruff, and THEN treating it would help more than just washing the scalp with a good dandruff shampoo.

So, I took to my guinea pig daughter’s scalp to try a little experiment. I parted her hair down the middle, and stuck one half of it up in a ponytail.

With the loose hair, I sectioned it off and tried the scraping thing. Granted, I was a lot more delicate with my deflaking procedure than a lot of these videos are — I was totally scared I would hurt her.

Then, I took to the internet to make a homemade dandruff remedy that included baking soda, lemon, and coconut oil. I put it on the half of her hair that I had just scraped free of dandruff. *I am NOT endorsing doing this on yourself!! Please seek medical advice.*

I let the goopy concoction marinate, and then I had her wash her whole head with a gentle dandruff shampoo.

Guess what — it seemed to work!! A couple of days later, I checked her head, and the part I had scraped really seemed to be doing better than the “control” half of her head.

So, are these videos not only plenty entertaining but teaching us a valuable tool to dedandruff the scalp? It just might be so!!

But, one thing is for darn sure. I’m going to *maybe a little secretly* continue to check out these scalp scraping videos. It’s a very satisfying way to destress from your day. Ha!

One word of advice before you go searching the YouTubes for ASMR Dandruff Videos. Some of the screen shots of the videos are pretty retch worthy. Be warned, and be careful.