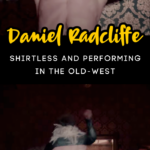 Harry Potter is all grown up.

Daniel Radcliffe, Harry Potter himself, is once again starring in the new season of Miracle Workers, an anthology comedy series, and this time the show is hitting the Oregon Trail.

If you don’t know what an anthology series is, think shows like The Twilight Zone — or in a series that is a little more modern, Black Mirror. (And, by the way, if you haven’t seen Black Mirror, what are you doing with your life?!?)

In an anthology series, you get a different story, and oftentimes different characters, in each show or season. An anthology is to visual media sort of what the short story is to literature.

Now, back to this season of Miracle Workers.

The preview for this season of the show looks absolutely hysterical!

In this trailer for the show, you see a shirtless Daniel Radcliffe, sporting leather chaps, and giving a burlesque style rendition of “She’ll Be Coming Round the Mountain.”

It’s like, if the Old West and West Hollywood had a baby, Daniel Radcliffe would be the spawn. Ha!

Daniel plays Reverend Ezekiel Brown, a dude who has been tagging along with Benny the Teen (played by Steve Buscemi) as they move west (along the Oregon Trail) in the 1840s.

It is suggested to the Reverend that he needs to loosen up just a bit, so he decides to drink a bit of snake oil to help release his inner diva (as it turns out).

The snake oil does it’s job, and Ezekiel hops up onstage in an old saloon, and gives us the most hysterical vogue performance you have ever seen set to the tune of an old hymn.

It took no convincing at all. Daniel was excited about the idea of the dance sequence as soon as we pitched it to him. He developed the dance with a choreographer and practiced it extensively on his own time, and obviously his hard work paid off because the routine is amazing.

Daniel Mirk and Robert Padnick, co-showrunners in an interview with EW

Reverend Ezekiel’s outfit just makes the performance! It is a genius bit of showmanship on its own, but to do it shirtless, in a feather boa and glittery blinged-out chaps — LOL!!

One of the fun things about working with Daniel is that the craziest scenes are always his favorite. He commits incredibly hard to pulling off the strangest, funniest bits.

Daniel Mirk and Robert Padnick, co-showrunners in an interview with EW

You can catch this hilarious episode of Miracle Workers: Oregon Trail on TBS, Tuesday, Aug. 3 at 10:30 p.m. ET.

You can also catch it on HULU with the Live TV addition.

To see the trailer for the episode, you can go HERE.