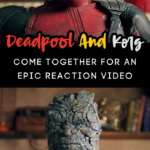 Deadpool just entered the world of the MCU, and he did it in the best way possible.

I love Deadpool. I mean, I love everything about him — including the fact that he’s Ryan Reynolds. *Heart Eyes*

I am also a HUGE fan of the MCU, and it’s about time that the two met.

When Disney bought Fox, I thought there was NO WAY that Deadpool would make the jump to the MCU.

Afterall, Disney doesn’t do “R” rated pictures, and Deadpool has QUITE the mouth on him.

PG13 is as risque as Disney dares to tread — you know, family-friendly and all.

But, that all changed when Deadpool joined one of the characters from the MCU for a new commercial for Ryan Reynolds’ new film, Free Guy.

Korg, from Thor: Ragnarok — my ABSOLUTE favorite film in the MCU — appeared alongside Deadpool as they did a classic YouTube style reaction video of the new trailer for the Free Guy film.

This video is HILARIOUS — but was there any doubt when Korg and Deadpool show up at the same time?!?

Now, this video is the first time that Deadpool has shown up under the Disney banner, but he was still the most Deadpooliest Deadpool there ever was — even if he had to be *Bleeped* sometimes. Ha!

He even takes a few shots at the Disney company and their purchase of Fox — which I LOVE that they can poke fun at themselves in such the perfect way.

We also have a guest reactor this week, Korg, who was not my first choice, but apparently everyone else was too busy over on Disney+.

Now, you might be wondering why the heck Korg shows up in the video with Deadpool.

It’s not a random choice, at all. Taika Waititi, who is the voice of Korg, also has a role in Free Guy.

It was pure genius to bring these two characters together to promote a movie which their actors are both in!

Now, hopefully this is the start of a beautiful relationship. We need Korg to show up in Deadpool 3, or maybe a new film altogether starring Korg and Deadpool — with Taika Waititi at the directorial helm, of course!

Deadpool: Any tips on getting into the MCU there, Korg?

Korg: Uh, have a dream. Uh, chase it. Lose that dream. Just sabotage all sorts of happiness in pursuit of that dream. Climb up to the peaks of their mountain, and when you get to the top, land at the bottom and realize you’re never going to achieve that dream, and at that point check your emails. Maybe you’ll get something from your agent saying Marvel wants to talk.

Free Guy drops into theaters on August 13, and this video makes me want to go ahead and get my tickets!!

You can see the entire Korg and Deadpool video HERE.