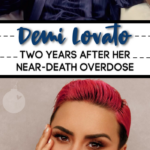 We’ve all heard that sometimes you have to hit rock bottom before you can begin to rise again from the ashes.

This seems to be what has happened to Demi Lovato since her overdosed 2 years ago — her rock bottom.

Demi has a new four-part docuseries coming to YouTube, Dancing With the Devil, where she will discuss the events that led up to her near catastrophic overdose in 2018.

While promoting this docuseries, Demi sat down with CBS Sunday Morning, and talked about how her life has been since clawing her way up from her rock-bottom overdose two years ago.

The doctors told me (when the overdose happened) that I had 5 to 10 minutes, and if noone had found me, I wouldn’t be here.

The interviewer, Tracy Smith, asked what had happened between their previous interview in 2016, and when she relapsed on heroin mixed with fentanyl in 2018.

Like, I was probably 24 when we did the (first) interview — I’m in recovery for a bunch of things, and I have been sober for however many years, but I’m still miserable.

I can totally get feeling that way! I mean, I really went through the ringer about that age, and I wasn’t doing it in front of millions of prying eyes.

Of course, no matter how you’re feeling in that moment you’re wanting to say like, “Yes, I’m Good,” because you’re in front of a camera. I’m doing an interview.

For the first time in my life, I had to essentially die to wake up.

She goes on to say that she didn’t control any aspect of her life at the time that she overdosed, and she was profoundly miserable.

Demi says that she had to take those two years, after her dance with death, to grow up.

She also says that what works for her now — WHICH WILL NOT WORK FOR ABSOLUTELY EVERYBODY — is what it called “California Sober.”

I really don’t feel comfortable explaining the parameters of my recovery to people. Because, I don’t want anybody to look at my parameters of safety and think that’s what works for them — because it might not.

I don’t feel this journey of moderation is a one-size-fits-all solution for everybody, too.

It has taken her some time to become this new version of herself, but she is finally here, and feeling the freedom that comes along with embracing her past and moving forward.