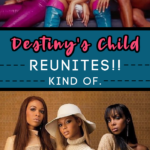 Just not in the cool musical way that we all were hoping for. *Sad Emoji*

Michelle Williams has a new book coming out —  Checking In — that recounts her mental health journey (which might be a really good read!)

In preparation for the launch of the new book, she has released some never-before-heard “group chats” between Beyoncé, Kelly Rowland, and herself.

Now, I’m not going to lie, I am all for listening to a Destiny’s Child reunion in any way we can get it.

But, I was hoping for new music, and not just some audio clips via Instagram posts.

Hey, at least we are getting a bit of behind-the-scenes convos between the former bandmates.

In the first audio clip, posted on Michelle’s Instagram page, she tells Beyoncé and Kelly that she is just “checking in” with them.

Listen — I just wanted to check in and see what’s been going on that’s making us more intentional about calling each other, checking in, and I’m loving these smiles.

Beyoncé lets her know that she loves her and misses her, and she is so proud of her former bandmate, who she calls Mimi.

Rowland agrees with Beyoncé, with a resounding “Amen.”

You are so inspirational for both of us — and we just love watching you become exactly who you are and the world — see your impact, wisdom and beautiful advice.

In the next clip, it appears that Beyoncé, Kelly, and Michelle are in a kitchen, just chatting it up with each other.

Michelle captioned the IG post, “Checking In Group Chat. Everybody’s in the ‘kitchen!'”

I think since the pandemic, it’s made it where we have to be intentional. Like, y’all, I’m just checking in, because most have been checking out.

There is a THIRD clip of the former bandmates, where Rowland asks what Michelle hopes the world “gains” from her new book.

It’s okay to not be okay. and it’s okay to tell somebody you’re not okay. I honestly should have done that with y’all. I’ve been open about a lot of things but I was never really truthful about how I really was. Even though y’all have proven to be safe friends, safe sisters, sometimes people have to know you’re not going to be looked at differently if you say, ‘Y’all, I’ve been really sad too long. Something’s going on.

Basically, friendship is the key, and checking in on those friends is vital.

SO, go check out Michelle Williams’ new book, Checking In — you can get it on Amazon now.

You can also go listen to the audio clips of the Destiny’s Child “reunion” on Instagram.

The FIRST audio clip can be found HERE on Michelle’s IG page.

And the FINAL audio clip can be found HERE.

Now, here’s hoping for a MUSICAL REUNION as well!!