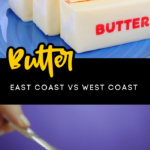 What is even happening right now? The world is a lie — everything I know is false.

This is along the same lines as finding out you’ve been Using Chopsticks Wrong Your Entire Life!

Is There A Difference Between East Coast and West Coast Butter?

Did you know that butter is actually different depending on which coast you’re on? Crazy, isn’t it!!

The world found out about the discrepancy in butter when Panic Inc. co-founder, Cabel Sasser, sent out the Tweet heard ’round the world!

He sent a picture of a “magic,” smarter butter dish that holds both — wait for it — West Coast and East Coast butter.

Up until this moment in time, I didn’t give a second thought about butter being different depending on which coast you are on, but now it’s all I can think about!

The ad that Cabel tweeted is for a product called the Butter Hub Butter Dish. It claims to be a different kind of butter dish that has four unique innovations, one of which is solving the West Coast / East Coast butter problem.

A quick search on TikTok confirmed this butter discrepancy to be fact. It actually gave a pretty good answer as to why the heck there is a butter difference in the first case.

TikTok user @bloodbathandbeyond gave us the downlow on the butter situation, and it’s actually pretty interesting.

See, butter used to be sold in 1 pound blocks, wrapped in butcher paper and covered by a cardboard box.

But, a pound of butter was pretty darn big for some people.

There was a restaurant in New Orleans that went to the butter manufacturers, and asked if they could cut the butter into four equal parts.

The butter manufacturers quickly obliged, and they began selling them in 4 different 4 ounce packages.

The East Coast butter became these long and skinny bricks of butter.

Now, some years later, the West Coast wanted to get in on the butter making business. The only problem was, they couldn’t get the same presses that the East Coast butter manufacturers used.

They ended up making their own butter presses, and thus the West Coast has shorter, wider butter — kinda like me.

The ounces in each brick of butter was exactly the same — 4 ounces — but the shape on each coast varied. And, it still does to this day.