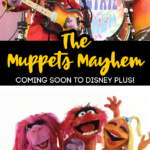 ‘The Muppet Show’ was HUGE when I was a kid, I remember seeing my first Muppet movie at the drive-in and it was so much fun.

That, of course, was many years ago, but I never lost that love for the Muppets!

I’m super excited to tell you that Disney Plus is putting out a brand new Muppet show, and I can not wait to watch it with my grandson.

This will be the second series featuring The Muppets to stream on Disney Plus, there was also a Muppets movie called ‘Muppets haunted Mansion that came out last fall on Disney Plus.

The newest Disney Plus Muppet series is called ‘The Muppets Mayhem’ and it is based around the ‘Electric Mayhem’ which old school fans will know is the band Animal plays drums with.

The Muppets that make up the ‘Electric Mayhem’ band are:

The new series will follow the band as they go on an “epic musical journey” as described below in a statement.

on an epic musical journey to finally record their first studio album. With the help of a driven young music executive, Nora, the old-school Muppet band comes face to face with the current day music scene as they try to finally go platinum.

‘The Muppets Mayhem’ series was developed and written by Adam F. Goldberg (creator of ‘The Goldbergs’), Bill Barretta, and Jeff Yorkes.

That’s all the information that we have right now, I hope to see a release date soon!