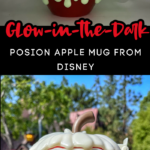 Disney’s Snow White and the Seven Dwarfs teaches the dangers of vanity or in other words, jealousy.

As we all know, the Evil Queen is so jealous of Snow White being so beautiful that the witch offers her a poisoned apple during the film.

Last year, Disney sold a look alike poison apple mug from the movie which has since, been revamped.

The improved mug is decorated in a bold red color, the same color fire trucks have during the sunlight.

Dipped in a white “brew” and a long, brown stem at the top, this mug has the same skull’s face the Evil Queen sees before she dips the apple in her cauldron.

The new mug even glows-in-the-dark which means when you’re searching for this mug in the middle of the night to brew a cup of tea, look for the glowing green cup in your pantry!

You can currently find Disney’s new glow-in-the-dark poison apple mug on eBay for $40 this Halloween!