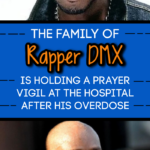 You may have heard that rapper DMX suffered an overdose on Friday night.

According to TMZ, the overdose happened at his home, and he had a heart attack as a result.

He was rushed to a hospital in White Plains, New York, and there were conflicting reports that either he had “some” brain activity, or he was in a vegetative state.

Either way, the prognosis looked grim.

(DMX) has battled substance abuse (in the past) and has been to rehab several times. His last rehab stint (was) back in 2019.

As happens so many times with drug addiction, the compulsion to use again is sometimes too great.

Doctors have not been very optimistic, and have warned family that he may not make it after this overdose that happened Friday night.

The rapper’s family have decided to hold a prayer vigil outside the hospital where DMX is getting treatment.

Some staff members of the hospital in White Plains held their own small vigil on Sunday night.

But, on Monday, DMX’s family was going to gather to hold up the rapper in light and prayer.

Now, usually during this time of COVID, people are not allowed to visit patients of the hospital, but we are told that DMX’s fiance and mother have been allowed in to see him.

We’re told some of his kids are also flying in to see him, and family members are holding out hope that he’s going to pull through despite our sources saying he has limited brain function and it does not look good.

The family is asking that EVERYONE please send good vibes and prayers of healing to the rapper.

We are definitely keeping DMX and his entire family in our thoughts at this time.