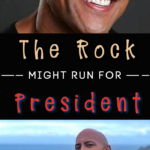 It looks like The Rock might be seriously considering running for the President of the United States, and are you serious right now?!?

Oh, for the love.

I mean, technically he meets all the qualifications.

According to TMZ, 46% of Americans would definitely support The Rock in a bid for the presidency 2024.

I would have to see his platform, I guess, but I’m thinking I’m not in that 46% of Americans.

I mean, I loved him in Moana, but that doesn’t mean I want Maui, himself, running for the supreme ruler of the land.

It’s highly possible that Mr. Johnson might not be serious about running, but it seems there is growing support from his fans.

I don’t think our Founding Fathers EVER envisioned a six-four, bald, tattooed, half-Black, half-Samoan, tequila drinking, pick up truck driving, fanny pack wearing guy joining their club — but if it ever happens it’d be my honor to serve you, the people.

Y’all. Just because you love a celebrity, think they are gorgeous, and devour their movies, doesn’t mean they would make a good leader.

Can I just remind you what happened last time we had someone in office that had no political experience.

I’ll get off my soapbox now.

We’ll let you know more as the story unfolds.