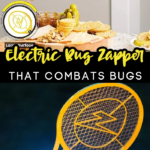 Bugs are inevitable to avoid during the summertime season and lets just say that the outdated fly swatters are so last year.

Whether you’re on vacation camping or simply sitting outside on the back deck, the buzzing in our ears from the unwanted company of the mosquito or fly can ruin the moment of soaking up some Vitamin D outside.

So in order to combat those pesky annoyances from tiny bugs during the dog days of summer, introducing the electric Bug Zapper in exchange for the flimsy fly swatter!

Charged at a 4,000-volt grid, this modern day fly swatter allows you to wipe out flies, gnats, mosquitos, and other pests with just one tiny movement from your wrist.

And yes, this bug zapper can be used indoors and outdoors with a built-in LED light for nighttime hunts and a triple-layer mesh to keep fingers safe when electrified.

Considering one charge features up to 10,000 zaps, it’s highly likely that these summertime bugs won’t be reaking havoc on your day off in the sun anymore.

Although when it is does come time for a charge, plug-in using the included USB cable like you would with any of your electronics at home.

So while we do our thing, (and that is sipping margaritas on the front porch0, let the bug zapper do its thing and eliminate those annoying bugs.

You can find the electric Bug Zapper on Amazon for a range of prices depending on which size you prefer, including a mini version, medium, and large for a bug free summer vacation season!

Who knew sitting outside was just that easy.