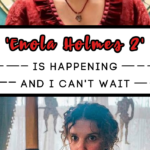 Enola Holmes 2 is a go at Netflix, and I’m so excited!!

Are you one of the many people who made the Enola Holmes film #1 on Netflix this summer?

I sure am! I think I watched it at LEAST five times — it was THAT good.

In case you know NOTHING about the flick — it’s about the younger sister of Sherlock Holmes, who is kind of a genius.

Enola (Millie Bobby Brown) goes on the search — an investigation — for her mother (Helena Bonham Carter) who has suddenly disappeared — who Enola believes has left behind clues for her to find.

Sherlock (Henry Cavill) isn’t really in Enola’s life very much, as he was grown when Enola came on the scene, but the brother and sister appear to be two peas in a pod.

Both are sleuthing geniuses, who are able to follow the trickiest of leads to get their answers.

The film, Enola Holmes, is based on Nancy Springer’s YA books that follow the life of the young Holmes sister.

Spoiler Alert — there ARE other books in the series, so it would make sense that there would be future Enola Holmes films.

Speculation of further films first started to appear right after the film was released in the summer.

Harry Bradbeer, the director of the film, really wanted to continue the Enola Holmes saga, and hoped they would be able to make up to five films.

Since then, things have been very silent on the Enola Holmes front — that is UNTIL NOW!!

On Thursday, Netflix made the announcement that we have all been waiting for on their Twitter feed.

The sequel is afoot! The adventure continues as Millie Bobby Brown & Henry Cavill return to the world of ENOLA HOLMES, reteaming with director Harry Bradbeer & writer Jack Thorne on a second film based on Nancy Springer’s book series about Sherlock Holmes’ brilliant sister.

What we DO know, is that Millie Bobby Brown and Henry Cavil are going to reprise their roles of Enola and Sherlock, respectively.

Now, we can sort of assume that the sequel will follow along with the second book in the Enola YA series.

As soon as we have more concrete information, we will pass the news along to you.