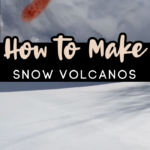 While we’re all dreaming of a white Christmas this year, snow days just wouldn’t be the same without some type snow building to show off to the neighbors next door!

Rather than making the same old three tier top hat and carrot nose we’ve all seen before, an erupting volcano is your next craft to make during snowfall!

That’s right, these snow builds aren’t just molded like a volcano, but they go the extra mile and erupt right in front of you.

Thanks to a few viral videos on TikTok including @doaner888 which caught the attention of thousands of viewers, you can now make an erupting volcano at home as soon as you notice a sheet of snow on the ground!

Start by placing a large plastic container on the ground and surround it with snow, pile high, and pack tightly.

Pour the vinegar only when you’re ready for the volcano to erupt and watch the “lava” bubble before you!

And who says you can’t have the biggest erupting volcano contest rather than the tallest snowman competition!