‘The Evil Dead’ Is Returning To Theaters For Its 40th Anniversary And I Am So Excited! 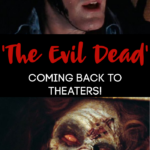 This year is the 40th anniversary of ‘The Evil Dead’, and this just happens to be a family favorite here at my house!

Sam Raimi pulled of ‘The Evil Dead’ on a super small budget and it has become a horror classic that is loved by many.

As a celebration of the 40th anniversary, the movie will return to theaters and there will even be a special introduction by Bruce Campell!

The limited screenings are being brought to theaters by Fathom Events and Grindhouse Releasing.

We are thrilled to give horror fans the opportunity to gather together and celebrate the 40th anniversary of Sam Raimi’s cult classic THE EVIL DEAD. Let’s kick off the Halloween season with the film that started an amazing franchise.

If that’s not cool enough, Lionsgate Home Entertainment is releasing a collectible box set of ‘The Evil Dead’, ‘Evil Dead II’, and three seasons of ‘Ash vs. the Evil Dead’ which is amazing!.

We are proud to present this special 40th anniversary screening of Evil Dead with Fathom Events. The original film has always been my favorite of the series. It is truly one of the scariest and wildest horror films of all time. I’m thrilled that a new generation of fans will have the chance to experience it in the way I first did — on the big screen with a screaming audience!

You can buy your tickets starting on Friday, August 13th from www.FathomEvents.com and through participating cinemas’ box offices.

1 shares
Move Over Alphas, Women Are Choosing 'Beta Men' These Days And It Makes Total Sense
← Previous
You Can Now Get Kraft Macaroni And Cheese Ice Cream, Because Why Not?
Next →
Click here to cancel reply.