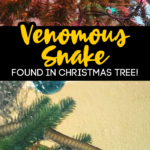 Ok, so I expect a squirrel in the Christmas tree, maybe a bird… but a venomous snake???

This family in South Africa better be counting their lucky stars right now that they are all safe.

They spotted an extremely venomous boomslang snake in their Christmas tree, and it’s one of the most dangerous snakes in South Africa.

Rob Wild said that he and his wife, Marcela, had noticed their cats staring into the tree… but we all know how cats are with Christmas trees.

They figured maybe there was a mouse hiding in the tree, but oh man were they way off!

I didn’t know what it was at the time, but then I Googled what snakes are in our area, and it came up immediately as a boomslang. I thought, ‘Holy Moses, this is the king of all poisonous snakes.’

Well, Rob… you were close, it is a dangerous snake, however, snakes are venomous, not poisonous.

Their bite and venom are extremely dangerous to humans and thankfully they were smart enough to not try to capture the slithering critter on their own.

They called a professional snake handler named Gerrie Heyns to remove the female snake from the tree and she was about 4.9 feet long!

It’s believed that the snake didn’t come in on the tree, but rather snuck in the house and then hid in the tree when it was startled by the humans or pets in the home.

The boomslang’s venom is a hemotoxin which means it destroys red blood cells and disrupts clotting.

A bite can literally lead to internal bleeding, even in a small amount, and kill someone.

I wonder what happened to that Cobra that got loose in Texas, I’m going to go check my tree now…