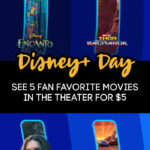 There are so many classic movies on Disney+ that I am watching for the first time, and I LOVE them!!

That’s fine and dandy, but I find myself saying, “Dang it. I wish I would have seen this in the theater! It would have been sooo much better.”

Thanks to AMC, I just might get the chance to see a few of those Disney+ hits IN THE THEATER!!

To commemorate such a Dis-Nerd kind of day, the Disney Franchise is releasing Disney, Marvel, Star Wars, and Pixar movies to select AMC theaters.

Even better news? The tickets are going to be BELOW the usual cost of a theater ticket — $5!!!

Disney is releasing 5 Fan Fave movies, and I’m going to go see every one of them!!

What Disney Movies Is AMC Bringing Back?

The first movie on the docket already has my kids in a frenzy. Welcome back Encanto. It’s time to start talking about Bruno again, and I expect that is all that I will hear in my house for the next month.

Next is a film that I’m not really too keen on, but my husband did a little happy dance when he found out it was coming to theaters: Rogue One: A Star Wars Story.

Then, we have an “oldie but a goody:” Newsies, starring Christian Bale. You know it’s a musical, so get your singing voice ready!

The next film to make its return to theaters is Disney-Pixar’s Cars, the OG. I foresee a Christmas filled with tiny Lightning McQueen toys in our future.

Now, the last movie that’s going to drop into theaters is my favorite of the 5. It just might be in my top 3 favorite movies of all time.

When And Where Can We Catch These Movies?

September 8th through September 19th are the days that your butt should be in those comfy theater seats, enjoying a bag of popcorn, a giant coke, and some great flix.

The select Disney franchise movies will be playing at AMC theaters across the United States. You can check online to see where your closest AMC is located.

Man, my closest AMC theater is an hour and a half away!!

Chris Hemsworth = WORTH IT!!