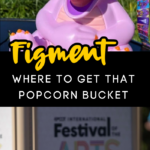 By now, you’ve inevitably heard about the Figment Popcorn Bucket. Whether it pops up in your news feed, or you are just a die-hard Disnerd and know everything about all things Disney, I’m sure you’ve seen it.

You’ve heard the tales — people are waiting in line for 6 plus hours just to get their hands on one of the $25 buckets.

Sure, like all Disney popcorn buckets, you get $2 refills for LIFE at any Disney park. In this case, you also get a cute (some say weird looking) purple and orange plastic dragon to keep your popcorn in.

But, would you be willing to 1) pay to get into the park, and 2) waste 6 hours of your day standing in line for a bucket of popcorn?

I would say, “NO.” But, there are PLENTY of people that did it!

The only way to see Figment is to head on over to Disney World, and buy your ticket to EPCOT.

Figment is a purple dragon that is supposed to be a “Figment of your imagination.” He hangs out with Dr. Nigel Channing — who you will recognize as Eric Idle of Monty Python fame — in the fictional Imagination Institute.

This popular little dragon has his own ride — Journey Into Imagination — his own song, and tons of merchandise, the likes of which you will probably only see if you go to EPCOT.

Why Is Figment So Popular?

I can’t really answer that one.

Maybe it’s because he is a rare character that you can only find at EPCOT and nowhere else.

Perhaps it is the catchy tune that will inevitably earworm it’s way into your brain. You can hear it HERE.

Some people say he is the epitome of the Disney operating strategy. Walt Disney once said:

“Disneyland will never be completed. It will continue to grow as long as there is imagination left in the world.”
“It’s kind of fun to do the impossible.”
“If you can dream it, you can do it.”

The whole Disney philosophy centers on imagination, and that’s what Figment is — that “spark” of imagination.

Where Can I Find The Figment Popcorn Bucket?

I’m guessing you don’t want to fly to Florida, fight that Orlando traffic to get to Disney World, pay to get into the park, and then stand in line for 6 plus hours.

Yeah, I don’t either.

Like with most collectible things, there are some people that have braved those lines simply because they want to resell the buckets.

I must say — I don’t hate them. If I wanted one of those Figment Popcorn Buckets THAT badley, I could have gone to EPCOT just like them, waited in endless lines, spent an entire day I won’t get back, and bought my allotted 2 buckets per person.

They are just a middle man here.

Good for them for having that entrepreneurial spirit.

Now, if they mark the bucket up to like $1000, I will have a problem. But, you know what. Let them do them. If there are people willing to pay that price, good for them.

You can actually get your own Figment Popcorn Bucket by going to the Ebay website.

There are a TON of sellers, and they actually haven’t marked these Figment Popcorn Buckets up very much. You will probably find that they are all between $100 and $125 — MUCH better than I was expecting they would be!

I just may get one for my daughter for her birthday. Figment is her FAVORITE, and it’s hella cheaper than taking her to the park to get one. LOL!!

Did you get a Figment Popcorn Bucket? Let us know below in the comments.

Disney is so anxious to make every penny, why not have people pre order them and pay shipping??? sounds to easy, and they want to make magic, sure they do......