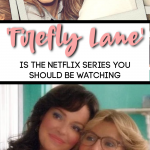 Netflix is KILLING it when it comes to original programming. I am so addicted to binge watching it ALL!!

I especially love their series adaptations that are from books — I’m looking at YOU, Bridgerton!

Well, they have done it again, my friends!! Have y’all seen the new Netflix series that is Firefly Lane?

If you HAVEN’T seen it, you should TOTALLY be watching it.

Yes, it is adapted from a book series; yes, it is amazing; YES, it stars some pretty kick-a** people.

So, the premise is pretty simple. Tully (Tallulah) and Kate meet in the 1970s, when they are both teenagers.

Tully, who has had a pretty strained relationship with her mother throughout her younger years, moves with her mom onto Firefly Lane.

Kate and her family happen to live across the street, and it’s like fate has brought these two together.

Even though they are completely opposite in most every way, they develop a friendship that spans 3 decades.

Both ladies go into journalism, with Tully becoming a famous TV personality, and Kate giving up her career to go the way of love and family.

By 2003 — when they are in their 40s — neither friend is really content or happy with their lot in life.

One thing is certain, however, they have each other, and that might be all they need.

Firefly Lane is based on the NY Times Bestselling book by Kristin Hannah, and it stars Sarah Chalke (You know her from Scrubs) and Katherine Heigl (Who was in Grey’s Anatomy).

Even from the very FIRST episode, you will LOVE this Netflix original show!

Just like EVERY OTHER Netflix original series, the first season of Firefly Lane is 10 episodes long, with each show clocking in at about 50 minutes.

In other words, you can totally have this show binge watched in just a couple days!

Even though it hasn’t yet been announced, everyone is HOPING that they renew this show for a second season, because this series has only covered about HALF of the book thus far.

There is still SO much Tully and Kate to be had!

Stop what you are doing RIGHT NOW, and go start the series. You will NOT regret it!!