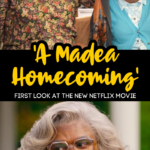 Madea fans, last year we told you that Tyler Perry was bringing Madea back out of retirement and now we have our first look!

The world has been a bit ugly lately and I know I could use some more laughs so I’m super happy about this!

I was looking at the state of the world and how polarized it is… nobody’s laughing. Nobody’s getting the chance to belly-laugh anymore. And I’m like, ‘What tool do I have in my arsenal that can bring that kind of laughter?’

The Madea character has been around since 1999 and I’m pretty sure most people know who the character is.

Tyler said that bringing the character back was “Like putting on gloves” that he had worn before… it just fits.

The new movie, ‘ A Madea Homecoming’, will revolve around a story line that features the LGBTQ for inclusion of all audiences.

How long does it have to be before you understand something? Even if you don’t understand, be open… I just think that if everything gets accepted in love, then you get a chance to see the person for who they are rather than what you think they are.

Who Is In The Newest Madea Movie?

You’ll definitely see some familiar faces from previous movies, here is a short list of those in the newest Madea movie.

When And Where Can You Watch ‘A Madea Homescoming’?

You’ll be able to watch Tyler Perry’s ‘A Madea Homecoming’ on Netflix when it releases on February 25th, 2022!