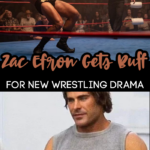 Zac Efron has more muscle than ever.

For A24’s upcoming pro-wrestling drama The Iron Claw, Zaz Efron certainly looks the role to play the part and there are pictures to prove it.

The Iron Claw is a biographical film that revolves around the legend Ken Von Erich (played by Zac Efron) and his family, including co-stars Jeremy Allen White as Kerry Von Erich, Harris Dickinson as David Von Erich, and Holt McCallany as Fritz Von Erich.

Additional cast members include Maura Tierney and Lily James with filmmaker Sean Durkin who has written and directed the new movie.

The first look into the new film features Zac Efron in the ring, dropkicking his opponent mid-air.

“Great picture of [Zac Efron] throwing a Von Erich drop kick!” Marshall Von Erich wrote in a recent tweet. “My dad thought it was an old picture of him.”

“The Iron Claw” is tentatively set to release sometime next year in theatres, up on the big screen.