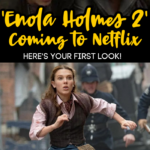 I am a huge fan of the ‘Sherlock Holmes’ stories and movies and I was so critical of ‘Enola Holmes’.

But, I was pleasantly surprised and absolutely loved it!

Millie Bobby Brown played the role of Enola wonderfully, she had the wit and the humor that I would expect from a member of the Holmes family.

‘Enola Holmes’ was a story about Sherlock Holmes’s younger sister as she goes on her own adventure to solve a crime and I have high expectations for ‘Enola Holmes 2’!

In ‘Enola Holmes 2’ she has decided to follow in her brother Sherlock’s steps and open her own detective agency.

From what I can tell of the newest storyline, Enola is hired by another girl to find her missing sister, which results in another grand adventure!

We set the film in the hustle and bustle of London, which is something that we didn’t really get to see as much in the first one. We got to really see what this young girl is doing in this crazy city that surrounds her night and day, and we get to explore these places in great detail.

The character of Enola Holmes is a big deal for Millie Bobby Brown, since she helped develop the character and serves as a producer on the film.

[Enola Holmes] may be the most important moment in my career so far because it’s something that I developed.

You’ll be able to catch ‘Enola Holmes 2’ on Netflix beginning November 4th, 2022 and I can not wait!