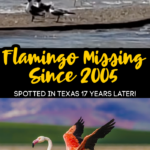 Well, this is an insanely cool and crazy story!

Pink Floyd is a flamingo that went missing from a zoo in Kansas way back in 2005.

Well, after 17 years, Pink Floyd has been spotted chilling in Texas… I wonder if he assumed a new identity?

Looks like Pink Floyd has returned from the ‘dark side of [the] moon’!

the Coastal Fisheries Division of the Texas Parks and Wildlife Department

Pink Floyd was captured in a video taken by the Coastal Fisheries Division of the Texas Parks and Wildlife Department where he was living his best life wading in the Cox Bay!

Zoo inmate number 492, AKA Pink Floyd, took off from the Sedgewick County Zoo in Wichita, Kansas by flight, and like many people… he hit the skies and headed to Texas!

Pink Floyd was already an adult when he arrived from Tanzania and they didn’t want to do a surgical procedure on him to prevent flight at that age.

Instead, they used a clipping technique on his feathers that helps prevent flight, but the staff missed the signs that he needed his feathers clipped and he decided he was busting out along with another.

Apparently Pink Floyd has been seen here in Texas for a few years as well as in Arknsas, Lousiana, and Wisconsin… although I believe he loves Texas the best!

You can watch the video that they posted on Facebook here.